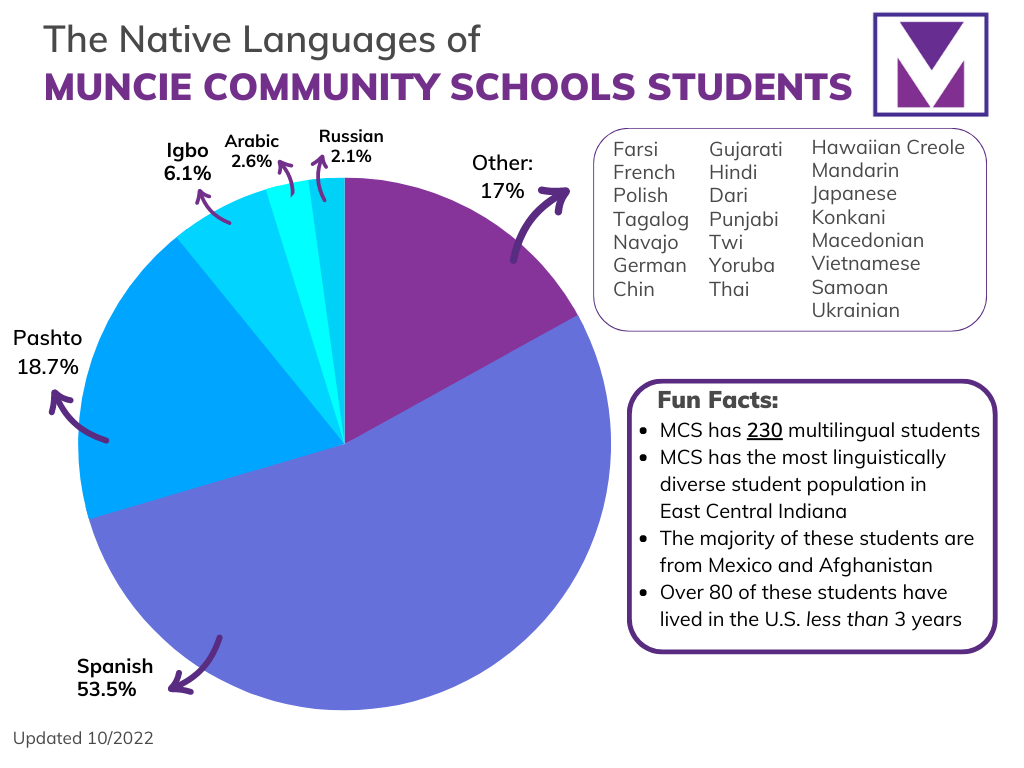 Two terms that will be referred to in this story is “cultural sensitivity” and “cultural competence”. Both definitions are from the American Psychological Association.

In Sra. Kelsey Pavelka’s past classroom, students were greeted with a calendar that featured eye-catching construction paper behind each day of the week. But something was more notable than the colorful decoration behind the numbers: the words December and Diciembre above the days of the week.

Pavelka is the Director of English Learners and was a teacher in the Dual Language Program at West View Elementary School.

The Dual Language Program officially started at the beginning of the 2017 academic year, but the preparation began a year in advance. Getting prepared to implement the program included committee meetings, exercising best practices, ensuring a physical space to hold the program and, reconnaissance by visiting other classrooms and ensuring that the leaders weren’t directly mirroring another program.

Eric Ambler, principal of West View, said that about 26% of the school’s population is enrolled in the Dual Language program. Although the program allows students to gain access of knowledge about culture and the language, he said the program affords them one big word: opportunity.

“One thing we try to stress is that we’re not only producing kids that are going to have success in their life from their academic knowledge, but also their cultural competencies and being a citizen,” said Ambler. “There’s a lot of research that supports how those kiddo’s brains are developing and what being in an immersive setting brings: talking about different cultures, dialect, celebrations and traditions.”

Ambler is correct. Although West View cites multiple research studies that supports the psychology behind an immersive setting, a study from Miguel A. Riestra and Charles E. Johnson performed in 1964 directly shows how the children enrolled in the immersive Dual Language program will have higher cultural competence then those that aren’t.

The study was conducted in Champagain, Illinois, and involved 75 students that were tested on their cultural competencies based on differences in teaching methods. The study results found that students who studied Spanish in an immersive setting had better attitudes toward other cultures, and in the case of this study, specifically Spanish-speaking individuals.

One persistent challenge for the hiring employees at West View has been finding bilingual and biliterate teachers. The teacher shortage has not made this challenge any easier to overcome, said Ambler.

Three years ago, West View had a student from Ball State University student-teach in her last semester of college, and when another teacher had to resign, that senior was able to finish the rest of the year and eventually become a dual language teacher at West View.

“That’s the design of a pipeline,” said Ambler.

That’s just one way that Ball State University has created a partnership in the world of culture and language. The Ball State Intensive English Institute has partnered with the Ross Community Center to hold English as a Second Language (ESL) classes. Although the two organizations have not partnered this semester, the community center is still hosting Spanish classes.

The Spanish classes are held every week on Tuesday and Thursday from 5 p.m. to 6:30 p.m.

Jacqueline Hanoman, director of the Ross Community Center, said she sees multiple types of people at the language classes, whether it be an urban planner, two women whose husbands are Latino, or two young girls that come from West View Elementary with their father, grandfather and aunt, who also want to learn the language beside the two young girls.

Hanoman herself is culturally competent, as she came from South Africa to work for the community center. Hanoman’s line of work has always involved sociology – whether that be poverty or community involvement.

Hanoman said that these community language classes are essential.

“People don’t realize how many non-native English speakers we have in our community now. They seem to be present, but they’re not prominent,” said Hanoman. “They’ve lived in the U.S., so they’ve been here for a while, but they haven’t had the opportunity to learn English in an oral way.”

Even though the partnership between Ball State and the community center has come to a halt this semester, the need for English classes hasn’t. Hanoman said she has people calling every week asking when the classes will start again.

In order to work toward cultural sensitivity, we need curiosity, said Hanoman.

“I think sometimes we lack it (curiosity) about each other. The gas station on 1300 W Memorial Dr is run by an Indian man,” said Hanoman. “A lot of people don’t know about his culture when they see him there.”

Pavelka from the elementary school said that community members need to take actionable steps to create a culturally sensitive community, her three tips being to educate oneself, connect with organizations in the community and be friends with people who don’t speak your native language.

When Hanoman was growing up, she loved going to what was called an “international bar.” This event was where the embassies would come together to showcase food and drinks from different countries.

“You would have the entire world showcasing beautiful things from their country,” said Hanoman.

When the community center was discussing was could be a “signature” event for the organization, Hanoman remembered her fascination with the international bar and pitched that as an idea. Although the center hasn’t been able to complete another International Festival due to the COVID-19 pandemic, the center was able to explore food, drinks and music from 18 countries and over 200 community members.

The community center isn’t the only organization that has explored features of different cultures and expanded their cultural competencies.

I was fortunate enough to attend the Rinker Center’s Friday Language Night featuring the Yoruba language. Ball State international student, Jacob Alebiosu, gave a lively presentation on his home country including geography, language, dialect, music and food from Nigeria. He said that one of the biggest cultural shocks he had was how much food there is everywhere, although he wasn’t sure that he liked any of it.

As I took the bus home and was contemplating how to write about something I knew nothing about, Alebiosu and his other guest speaker sat on the bus. Alebiosu opened a pre-packaged snack and started to dig in as the bus moved toward to the next stop.

Alebiosu’s partner speaker started a conversation with a smile, with a woman that got on at the next stop, presumably in their native language. Maybe it was Yoruba, that I had just learned about.

By the time the bus stopped, and I needed to get off to walk home, I took one last glance at Alebiosu, who looked more than disappointed from his plastic bag of miniature muffins.

What I’ve learned from my conversations with community members, classmates and community leaders is that being culturally sensitive is not about going to great lengths to learn about a culture. It’s not about reading research papers, learning an entire language or visiting another country. Sometimes, it can be as small as noticing a lack of enjoyment from a pack of tiny muffins.