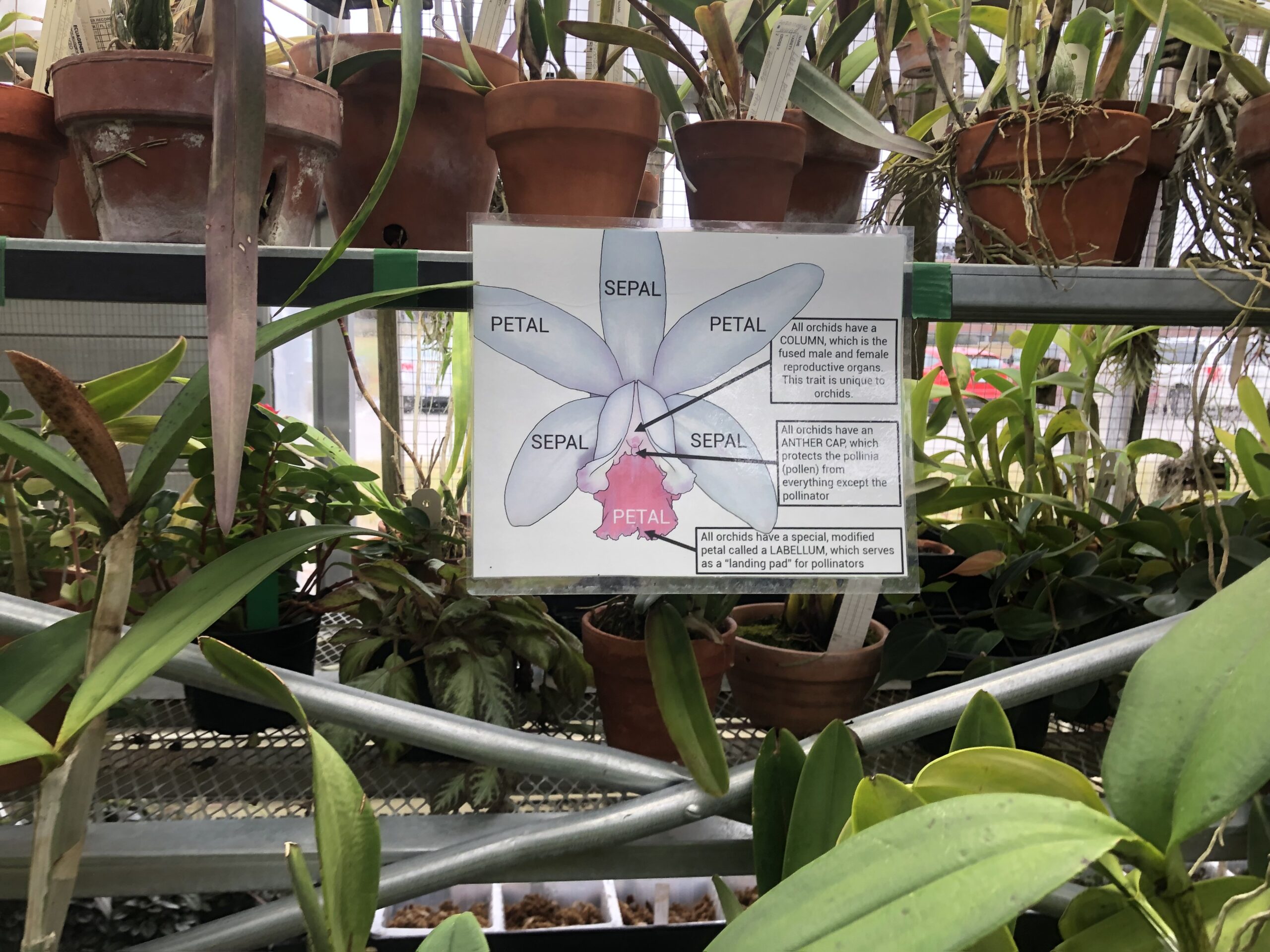 A mandarin-colored leaf peers over the veiny flesh of an orchid. The fuschia lung-like petals of the flower face inward. The human-like stature of the plant creates curiosity and enchantment. The orchid that could stunt double as a fairy: The Pink Lady Slipper Orchid. A population of Pink Lady Slipper Orchids sit quietly as the morning mist taps their petals at the Ball State Dr. Joe and Alice Rinard Orchid Greenhouse.

The orchids were donated in memory of Betty Kendall, as she was a notable member of the Muncie Community. Her fashion sense mirrors the name of the Pink Lady Slippers, as she was always found modeling high heels, said Erica Oliver.

Scientifically known as the Paphiopedilum, according to the Guide to Houseplants, the Ball State Greenhouse provides a good environment for the orchids to blossom. Not only does the area provide a humid environment with a long list of other plants for the orchid to thrive, the sporadic misters attached to the clear ceiling provide humidity that will “keep the orchids happy.” The orchids require sunlight, although not direct. The Ball State Greenhouse provides this environment by using a frosted glass that allows for intense light from the sky, but no direct contact between the sun and the orchids.

Although the Pink Lady Slipper is not endangered, it is listed as a “special concern” on the Native Plant Protection Act. According to the California Department of Fish and Wildlife, the protection was enacted in 1977, and “allows the Fish and Game Commission to designate plants as rare or endangered.” There are 64 species and subspecies that are protected under this act. So why is the Pink Lady Slipper listed as a special concern?

Scientifically, Pink Lady Slippers have trouble staying alive in the wild without care from employees like at the Dr. Joe and Alice Rinard Orchid Greenhouse. According to an orchid infographic from Leslie Hanson, the Pink Lady Slipper Orchid can take up to 16 years to grow into full adulthood. That’s with proper care, and no roadblocks like extremely hot weather or natural disasters. These orchids also require vernalization or “the artificial exposure of plants (or seeds) to low temperatures in order to stimulate flowering or to enhance seed production.” These factors can all be controlled in a greenhouse, which is what people like Erica Oliver are doing for the Pink Lady Slipper orchid.

But aside from enchantment and toward deceit, the Pink Lady Slipper orchid is sought after from several flower-lovers, two accounts of which were 11 years apart.

In 2009, Minnesota’s local news reported that the Department of Natural Resources had received a note from Frank Brunner, who had noted that a man and woman came into his yard and stole a Pink Lady Slipper Orchid, or more notably in Minnesota, the state flower.

In 2020, the National Park Service for Big South Fork in Kentucky and Tennessee posted a press release concerning the theft of 30 Pink Lady Slipper orchids. How come in 11 years, the theft has not only continued, but increased?

According to Susan Orlean, author of Orchid Fever, collecting these orchids could be somewhat of a lovesickness.

“If you begin collecting living things, you are pursuing something imperfectible, and even if you manage to find them and then possess them, there is no guarantee they won’t die or change,” she said.

So, what do you think? Are the Pink Lady Slipper petals full of curiosity – or deceit?