Research on aggression in media is often focused on the aggression’s influence of later aggressive acts. One area that is often not researched is the perceptions of these aggressive acts, and how they are influenced. Prior research on influences on perceptions have shown that they can be influenced by ingroup bias (Hastorf & Cantril,1954; Kim, 2016) and differences in personality (Costa & McCrae, 1986). These areas of research can be tied together in order to look at the differences of perceptions of aggressive acts and how they are influenced, specifically looking at political ideology and agreeableness. This is the focus of the present study, by seeing how the differences of political ideology and agreeableness affect how individuals perceive acts of aggression. The acts of aggression that will be focused on are video media of interactions between police and protestors during a Black Lives Matter protest.

Allen Warren | Life's a Peach: The Convergence of Sexuality and Class in Guadagnino's Call Me by Your Name

Call Me by Your Name (2017) became famous for its “peach scene,” though the orchard around the Perlmans’ villa where this fruit thrives could not have grown on its own. Distinctions of class and a parasitism by the most affluent of their workers cultivate the paradise where director Luca Guadagnino sets the blossoming romance between Elio and Oliver. Apricots are a clear metaphor for desire here, yet their prolificacy is only possible through the invisibility and silent intervention of other food items, from peas to latkes to water. Critics have pointed out the beauty of the Italian setting and its use as a temporary escape from heteronormative surveillance, as well as the way domestic workers flow in and out of scenes almost wordlessly. What these critics have missed is the connection these occurrences have in explaining how the working class have built (butdo not benefit from) this heaven on Earth, where the young male lovers may permit their bodies to act without restraint. While queer and class theories inform this discussion, my primary vehicle for interpretation will be food, both for its prominent place in the movie and for the ways it parallels the class structure at the villa. I find the film quietly reflects on the levels of economic privilege and exploitation needed to experience the paradise it depicts, with the usurpation of food in many scenes helping to remind the audience of the inability of this space to be wholly subversive.

The purpose of the current study is to examine whether trait anxiety affects participants’ ability to recognize facial emotions. Past research has supported the notion that high levels of anxiety may result in an inaccurate recognition of emotion. Specifically, possibly through mechanisms such as the Facial Feedback Hypothesis and Embodied Emotion Simulation, past research has supported the notion that individuals with anxiety are more likely to misclassify nonthreatening emotions as threatening. However, there has yet to be a robust set of studies that observe this relationship with the added factor of ambiguity created by surgical masks. In this study, college students completed a trait anxiety measure and emotion-recognition task consisting of 56 photographs of Black and White males and females who were expressing anger, fear, disgust, happiness, calm, sadness, or neutrality. Half of the photographs included surgical masks covering the bottom half of the person’s face. Three hypotheses were tested: Participants with higher trait anxiety will be less accurate at identifying masked and unmasked emotions than participants with lower trait anxiety overall; Participants with high trait anxiety will misclassify non-threatening masked and unmasked emotions (happy, calm, neutral) as threatening emotions (anger, disgust, fear) more often than participants with low trait-anxiety; and participants with high and with low trait anxiety will perform more accurately in assessing unmasked emotions than in assessing masked emotions. 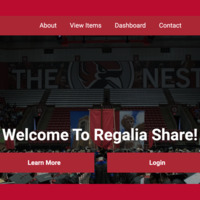 Regalia Share is a web-based application that allows Ball State University faculty to loan and borrow various pieces of Regalia to help foster a greater sense of community. 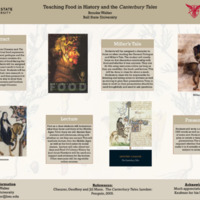 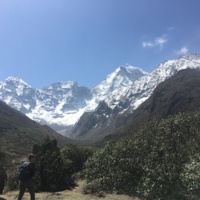 Leucogranites are an igneous granitic rock with very few dark minerals. They are a significant characteristic of the Himalayan mountains and located throughout, but their formation history and evolution in the Himalayan region are understudied and unclear. Himalayan leucogranites contain mineral geochronometers, which selectively incorporate radioactive isotopes during formation, and can be dated using the known half-life of their isotopes. Zircon is one mineral geochronometer that contains three unique decay series collectively known as the uranium/lead (U/Pb) system. These isotopes can be dated, then checked against one another to determine the accuracy and precision of resultant age dates. Similarly, the depletion or enrichment of light rare-earth elements (LREEs) and heavy rare-earth elements (HREEs) has geologic implications: they may indicate the mode of magma generation and/or determine a rock’s mineral assemblage.

The Himalayan leucogranites’ age dates will determine when the parent magma crystallized, give insight into local fault movement timing, and clarify the number of metamorphic phases the leucogranites underwent. Additionally, further implications include: broadening geologic literature regarding mountain evolution following continental collision, which can be used globally to understand other mountain-building events; explaining the process of deep subsurface magma generation; and ascertaining the probability of viable ore deposits associated with leucogranites. If the presence of ore and rare-metal mineral deposits are confirmed, they may stimulate the local economy by providing resources for metal-workers, miners, and artisans. This study aims to answer three questions regarding the Himalayan leucogranites’ formation and evolution:

Eight leucogranite samples were collected May-June 2018 along the Everest Base Camp trekking path. National Petrographic Laboratory made thin sections of six samples in December 2020. Petrographic analysis began in January 2021 to identify mineral assemblages and metamorphic features and will continue to October 2021. All eight samples have been crushed according to standard mineral separation practices and four were sent to the Arizona LaserChron Center (ALC) in February 2021 to finalize mineral separation. LA-ICP-MS and SHRIMP will be utilized to determine the t/REE composition and zircon age of the leucogranites. Plans have been made to travel directly to ALC in May 2021 to conduct instrument analyses. Expected results are Miocene-age zircon dates, 2-3 metamorphic phases, a range of timing for the South Tibetan Detachment's motion of about 20 Ma, and the presence of rare-metal minerals apparent in thin section. 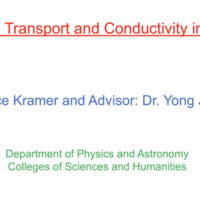 As technology pushes computer processors to become smaller and denser, processor chip manufacturers are trying to find ways to make transistors smaller and smaller. However, current transistor designs are becoming increasingly difficult to squeeze into smaller and smaller areas without compromising the integrity of the transistors. As a result, a new candidate has gained attention for its potential uses in many areas, especially nanotechnology: Deoxyribonucleic acid (DNA).

DNA has many properties that make it a potential candidate for nanotechnology including its ability to self-assemble, which can allow easier fabrication on the nano-scale. However, studies have also shown DNA to have insulating, conducting, semi-conducting, and superconducting properties given different conditions.

These findings, as well as other known factors about DNA, are leading researchers to study DNA's potential in different aspects of nanotechnology, such as potentially being a semiconductor within a nanoscale, self-assembling transistor. This project will investigate electron transport and conductivity in DNA molecules.

Department of Physics and Astronomy

A subscription-based analytics tool for basketball coaches that provides insight on the efficiency of their team from season performance to game performance. The tool also includes advanced stat tracking, line-up proficiencies, and play-by-play tracking.