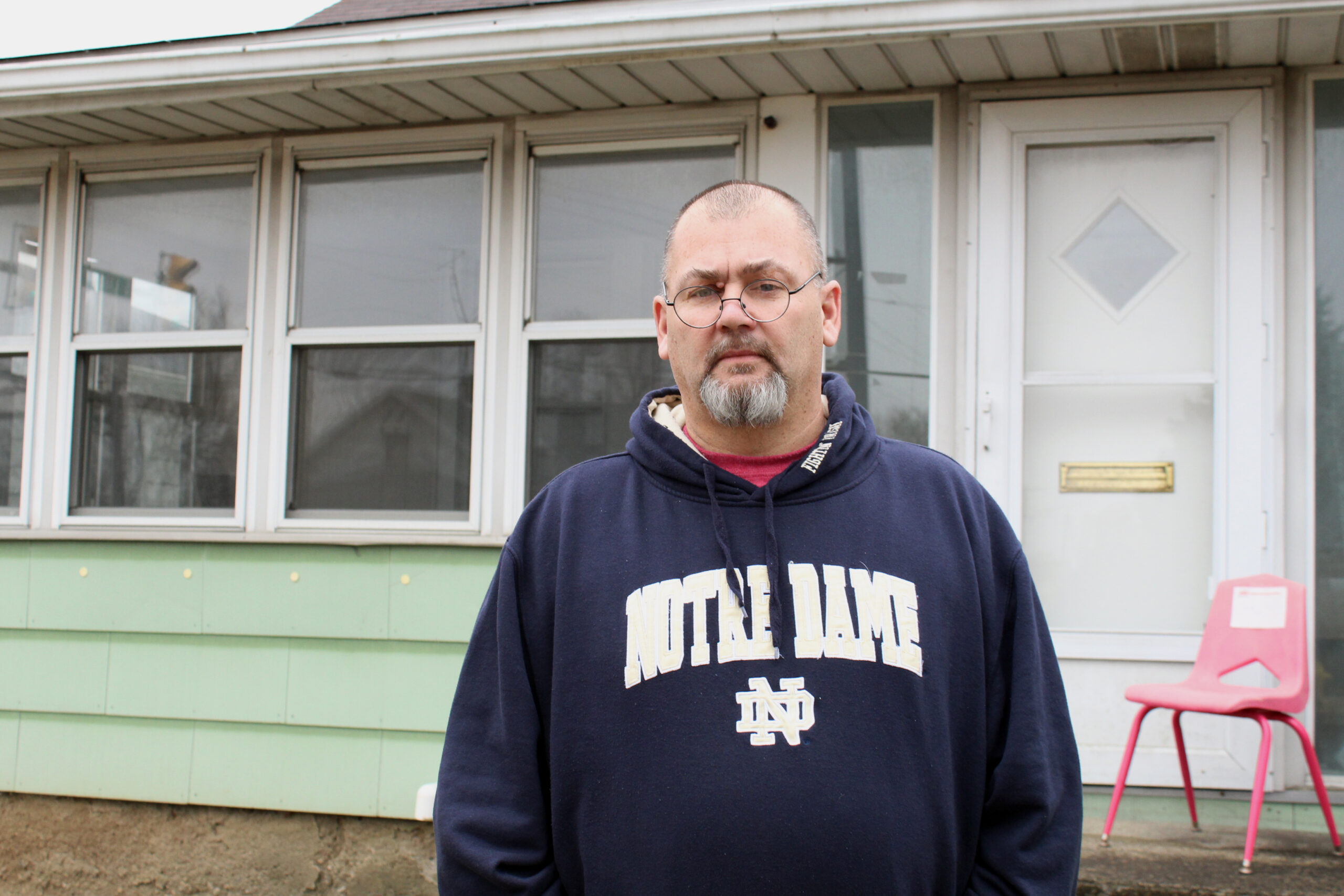 These days, 55-year-old Brian Bell leads as many as 60 drug and alcohol addicts in a faith-based addiction recovery meeting every Thursday night at Muncie’s Tabernacle of Praise Church while his wife, Jennifer, works the sound system.

It’s an emotion-packed spiritual uplifting that is far from the life that led him to this point. Bell uses his story of addiction, loss and recovery to inspire the addicts he sees every week.

Music always has been important to him. It’s been a way to connect to people. When he was 7 years old, Bell picked up a 1964 Fender Telecaster bass guitar and started to play. He says he and his family were part of a gospel group called the Church Bells.

“We traveled to different churches all over the place,” Bell said. “When I was 12 years old, we produced our second album.” Bell remembers watching his father on stage, too. The elder Bell traveled the world as a guitarist in a band. He played in five different countries and 47 states for nine months out of the year, Bell said. When his father was home for those three-month stretches, he and his brothers and sisters would learn new songs, choreography and harmony parts.

Bell says in those days, he noticed dramatic mood shifts in his father.

“As he continued to come home, he would be happy and then he would go play at local clubs, where he would drink . . . ” Bell said.

Bell was in his early 20s when he started drinking. Eventually, he added drugs to the mix. By 32, Bell was using cocaine and meth.

By then, Bell knew he had a problem.

The addiction, Bell says, is to blame for his criminal behavior, behavior that would lead him to jail many times. Bell’s criminal records dates back to January 2002, according to the Huntington Court of Appeals. He’s had 12 convictions, including domestic battery, resisting law enforcement, operating a vehicle while intoxicated and public intoxication. He also was arrested seven times for domestic violence and fighting.

His first wife moved out with the kids. In 2008, Bell met Jennifer, his current wife, at the Daleville American Legion, where he was performing.

“He had this previous life of rock’n’roll, drugs, drinking and stuff that I didn’t know,” she said. “That was something I wasn’t used to because I didn’t know that person before.”

She stuck with him for a while and the two were engaged to be married but in 2010 following another relapse, the couple broke up.

The two had a clandestine meeting in 2012, but not before Bell says he hit “rock bottom.” He was homeless and drunk most of the time, and living in a storage unit, where he kept everything he owned. He remembers sitting on his makeshift bed, in clothing wet from drink, holding his last bottle of vodka.

He had lost everything: Jennifer, a three-bedroom house, his two “very nice” vehicles and about $30,000 to $40,000 worth of musical equipment.

“Sleeping there at night “felt like I was freezing to death,” Bell said. One evening, “I was either having seizures from alcohol poisoning or withdrawals, and I had been on a bender for a while,” he said. “I couldn’t tell you what day it was or anything.”

Bell remembers getting into a car with a guy he knew from one of the clubs he played. They stopped for something to drink and Bell had a seizure. He was later told that his blood alcohol content was 0.87 percent — six times the legal limit.

“The doctors didn’t expect me to live and they told my mom and my oldest daughter that,” Bell said. “They were the only two who came because I had broken every bridge and never mended them again,” he said.

Doctors told Bell and his family he wouldn’t live much longer and if he did, he would likely have severe brain damage.

Although Bell left the hospital with no permanent damage, he knew it was time to get his life together. He went directly to the Muncie Mission and asked for help. He started attending Alcoholics Anonymous meetings, and met his sponsor, Ted.

“I would go to many AA meetings and I would leave. I would say, ‘Man, I’m not coming to these meetings no more. It just irritates me to come to these meetings. They were so stupid.’ One of those times we had a speaker and Ted asked, ‘Did you learn anything?’ I said, ‘No.’ He goes, ’Learn not to be like these speakers.’ I guess I did learn something: Don’t be like them.”

In January 2012, after being sober a few months, Bell fell out of a tree he was trimming, badly injuring his back. He was taken to the hospital. What he didn’t know was in the intervening years Jennifer had become a surgery educator at Indiana University Ball Memorial Hospital in Muncie. On this day, she did not expect her patient to be anyone she knew.

The doctors took Bell back to the surgery room and an anesthesiologist told him what he was going to do and left the room. “Jennifer walks around and through the curtain. It was like a movie. It was like angels singing ‘Ahhhhh,’” Bell said. “I started crying and I told her, ‘I loved her and I was sorry.’ And she said, ‘I forgave you a long time ago.’”

In 2016, Jennifer and Brian started “Road to Redemption Addiction Recovery,” a faith-based addiction recovery group that meets weekly at Tabernacle of Praise Church in Muncie. At the first meeting, there were six people.

“Me and Jennifer made hot dogs,” Bell said. “We read from the Bible and we just talked.”

Today, the group serves about 60 addicts every week. Recovery addict Charles Koons is one of them. Before Road to Redemption, Koons used controlled substances, mainly painkillers, and cooked meth, he said.

“I have done drugs and I have been able to walk away from drugs so many different times,” Koons said. “When I started doing meth … it grabbed my entire life and I wasn’t able to walk away. The only thing that saved me is when I went to jail.”

Like Bell, Koons said he lost everything, including custody of his children. Koons was in the Delaware County Jail from 2012 to 2017. Since being released he has been a regular at Road to Redemption. He says Bell has been a savior to him.

“A lot of the times if he wouldn’t have been there, I honestly don’t know what I would have done,” Koons said. “He’s a great person to look up to and look to as a mentor. He and his wife both have been great to me and my family. He’s what made me a great leader at Road to Redemption. I look to what he has done and I have seen his testimony. He’s came back from a deep hole too. I know I can do it.”