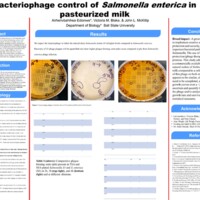 Salmonella spp. are the number one causative agent of foodborne illnesses in the United States each year. Salmonella spp. have been isolated from various food matrices including eggs, poultry, milk, and beef. Bacteriophage are viruses of bacteria. Bacteriophage, also known as phage, insert their genetic material into their hosts, hijacking their DNA synthesis machinery in order to produce more phage inside the host cell. Bacteriophage have been considered an alternative to antibiotics because of this lytic ability to kill their hosts. The goal of this study is to identify novel Salmonella bacteriophage from raw dairy milk and assess the ability to infect its host. For this experiment, three bacteria were used; Salmonella enterica subsp. Enteriditis, Salmonella enterica subsp. Pullorum, and S1 (an uncharacterized Salmonella species isolated from raw dairy milk. Salmonella enterica subsp. Enteriditis was used as the host for the novel bacteriophage. Upon phage isolation, enrichment is performed to increase phage titers. The phage is then added to various densities of bacteria to assess its ability to control growth under optimal conditions. Results from this experiment will lead an insight into better biological control methods.