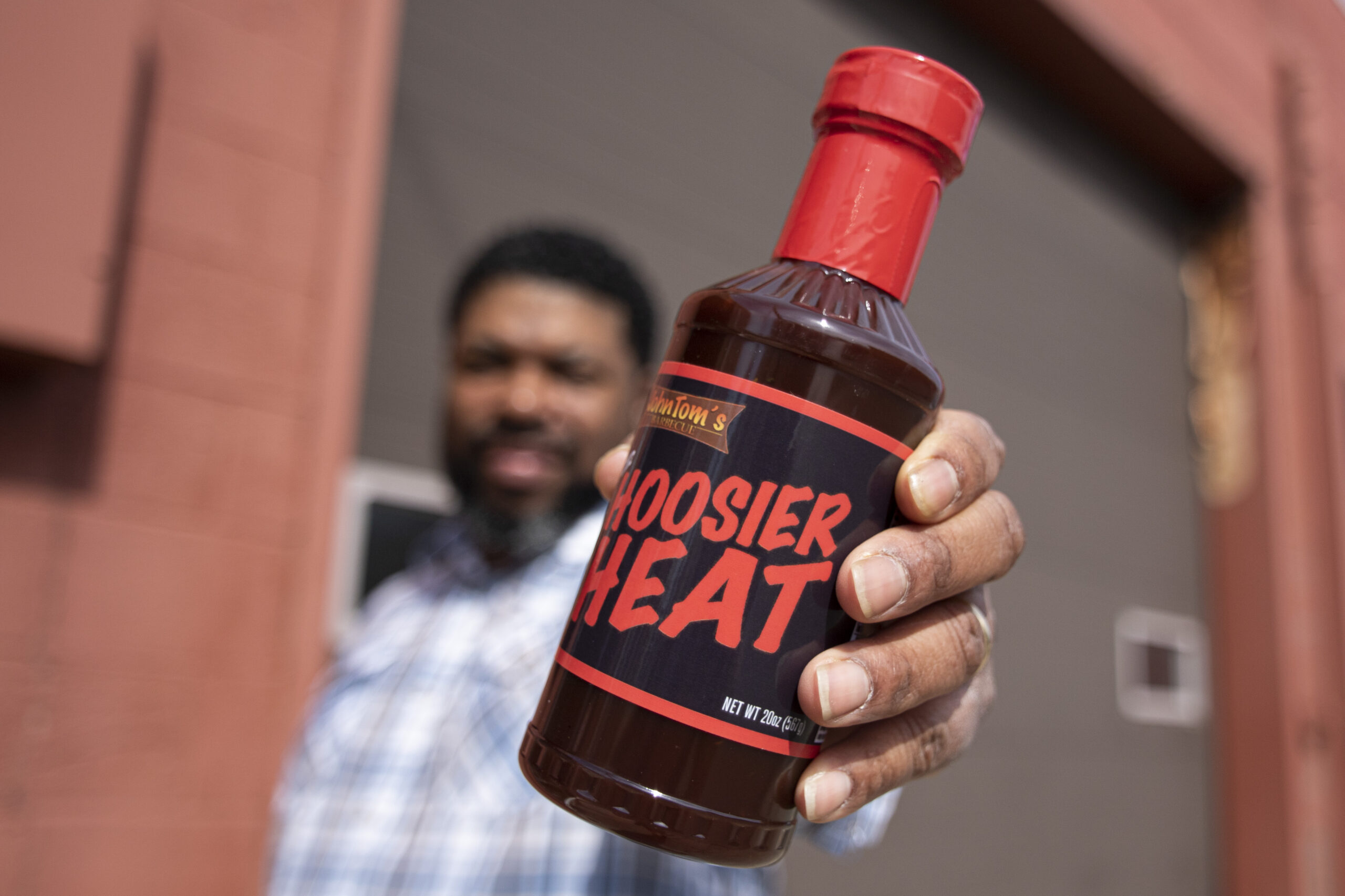 As a child, when Muncie native Lathay Pegues was barbecuing with his grandfather in his Industry neighborhood, he never would have dreamed his love for barbecue would bloom into a nationally distributed brand, JohnTom’s Barbecue.

What started as an experiment when he was in college to recreate his grandfather’s secret barbecue sauce recipe has grown into a successful business for Pegues and his business partners, Rodney Robinson and Terrell Cooper. In the beginning, Pegues and his partners were making batches of 288 bottles of various sauces that he sold out of the back of his car.

In 2008, Pegues scaled up the production and signed on with a co-packer in Chicago, who produced 400-gallon batches of his sauces. But the business really took off in 2014, when he left his day job and devoted his time to JohnTom’s. In January 2021, JohnTom’s Barbecue signed with US Foods, its first national distributor, and has over 100 retail locations.

Pegues’ passion for barbecue was imparted on him by his grandfather and the company’s namesake, John Tom Branson. “He and all his family, parents, siblings, they all moved from Mississippi, up north, just looking for a better life outside the Jim Crow South. They landed in Muncie. And my grandpa brought with him this passion for barbecue,” Pegues said.

His grandfather created a secret barbecue sauce that was loved by all who had the honor of tasting it.

Though Pegues tried for years to recreate the recipe, he never quite cracked the code. “Of course, that didn’t get it. But what that turned into was this five-year trial and error. I just kind of veered off from trying to duplicate his sauce. And just stuck with what I was onto.” After inviting coworkers, family, and friends to barbecues, the consensus was Pegues should try to sell it.

JohnTom’s Barbecue had a slow start when it was created in 2006, but in 2014 Pegues left his job at the Star Press, where he was a journalist, to devote himself full-time to the entrepreneurial enterprise.

Pegues, who grew up in Whitely and still lives in the neighborhood, says being in his hometown and cultivating relationships was key to his success.

It was in Muncie where he received the support of his and his wife’s families, as well as the support of Muncie’s mayor and some local organizations.

Pegues, who graduated from Indiana University in 2000, says not to underestimate the importance of networking and maintaining relationships, both business and personal. Today, Pegues is an officer in new Muncie-Delaware County Black Chamber of Commerce.

Another piece of advice from Pegues is to be brave.

“I was fearful to leave the Star Press. That’s probably the scariest thing I’ve ever done in my life. But once I did it, and once I got used to not working a traditional job and doing this, once I got acclimated and got used to it, I said, I probably should have left there a long time ago.”

Pegues said through it all he has realized hardships come with starting your own business, but it is worth it.

“I think out of that, people realize that life is short,” he said. “And I’m done wasting time not chasing the dreams I’ve always had.”