Alfaretta Poorman Hart was an avid social reformer, millionaire, and Muncie's first ever police matron. She holds an interesting role as both being from the upper eschelons of society and a working woman. Learn more about her in the video below.

This video was researched and created by Caitlyn Garcia, Adriene Martin, and Rylee Norton. 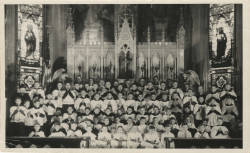 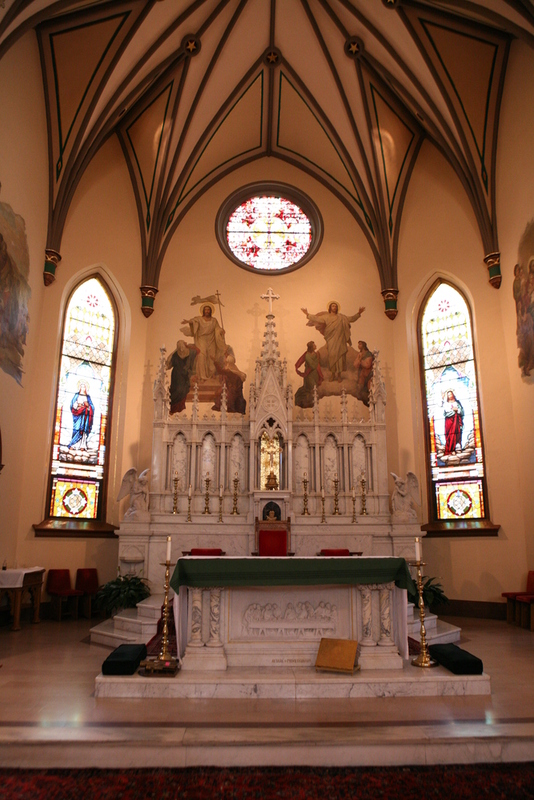 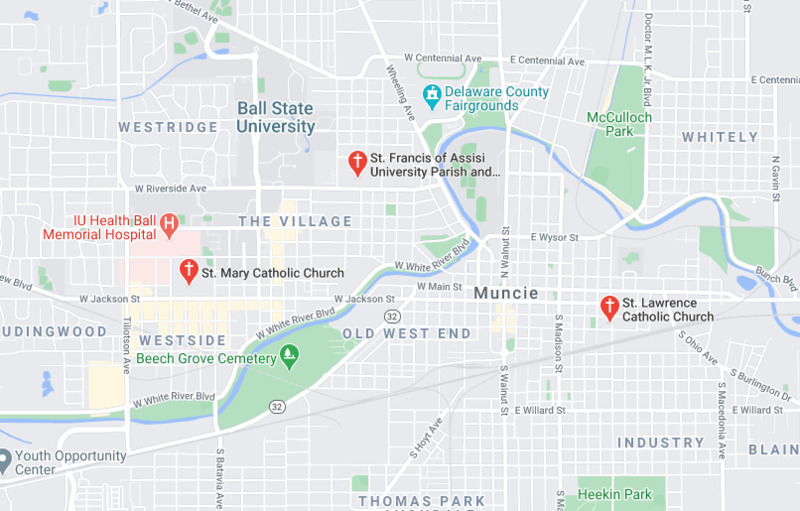 Among many other things, Alfaretta Poorman Hart was also Catholic. She would have worshiped at St. Lawrence parish church, which is located in downtown Muncie at the corners of Adams and Hackley streets. In the early 1900s, Catholics were a small minority of the city’s population, which overwhelmingly practiced various Protestant denominations. Although Muncie’s Catholic population has now expanded to three parishes, when Alfaretta lived here, St. Lawrence was the city’s only Catholic church. Built in 1869 with a companion school run by nuns, St. Lawrence was followed by St. Mary’s parish church in 1930, finally St. Francis’ parish church in 2001.

The modern St. Lawrence parish church, although slightly different in appearance, would be recognizable to Alfaretta. The two pictures to the left show the church as it looked in the early 1900s (above left) and how it looks in 2020 (left). While some structural elements have changed, the main elements of the church, such as the altar and pews, remain in the same place.

Physical buildings and their condition can tell us a lot about the communities that built and maintained, or still maintain, them. While texts, images, and film footage are often easier to access, the position of buildings within a community, their incremental growth, and their changing uses can tell important civic stories about population and wealth growth, changing taste and religious practice, and urban development.

The third image on the left shows the location of the three current Muncie Catholic parishes. Their growth and expansion also tells the story of the growth and expansion of the city of Muncie. The town originally was mainly confined to south of the White River, where the original parish of St. Lawrence is located. In the 1890s, as factories settled to the north and south of the downtown core, new working-class neighborhoods, like Whitely and Industry, clustered around them. In the early 1900s, new middle-class housing developments grew in the Riverside and Normal City neighborhoods to the west of the downtown area.

As this region developed and the Indiana Normal School became Ball State University (1918), the diocese founded St. Mary's parish to serve about a hundred families. After World War II, the GI Bill encouraged an expansion of post-secondary education, which coincided with continued suburban expansion on the western and northern sides of the city. This culminated in the growth and expansion of Ball State University, resulting in the new parish of St. Francis at the turn of the twentieth century, which is attended chiefly by university professors and students

To hear more about the historian's process and the methodologies used to research and create historical narratives, check out the discussion with Garcia, Martin, and Norton below.

Alfaretta Poorman Hart was notable for her contribution to the community through her police work and her religious life. Click on Carrie Dill Hageman next to learn more about a woman who impacted her community through religious organization and interacting with the police.