Kate (Catherine) Phinney was an infamous Muncie businesswoman, who ran several “houses of ill repute” in the city’s red light district. Her successful entrepreneurial activities resulted in outrage and threats from Muncie's moral elite. Learn more about her life in the video below.

This video was researched and created by Trinity Croy, Brenna Haley, and Kara Nahrwold. 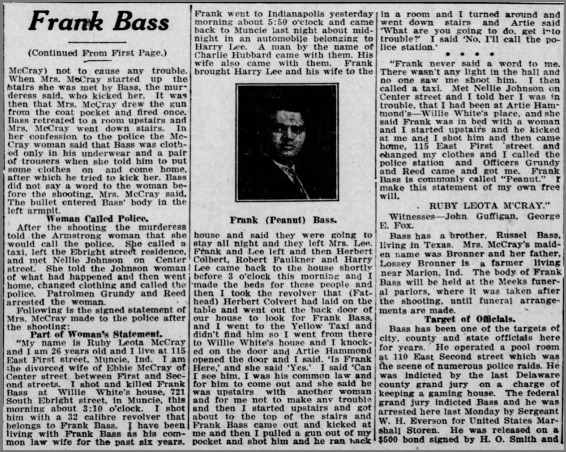 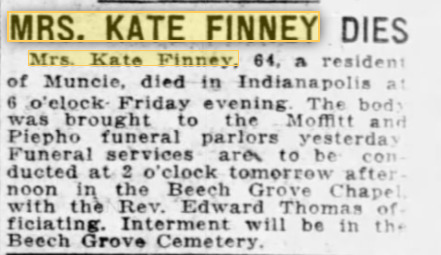 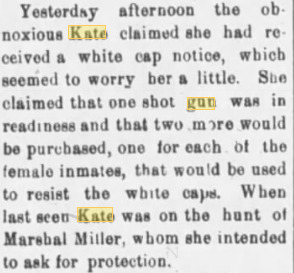 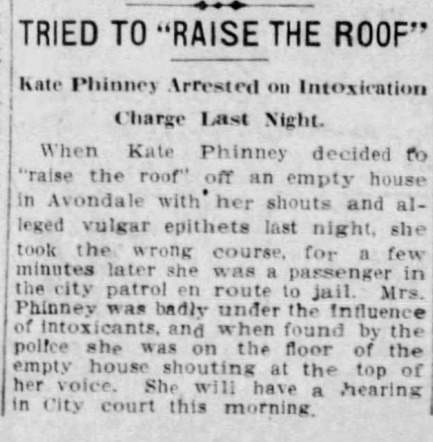 Although Kate Phinney's activities were framed by her critics' morality, she was a successful businesswoman at a time when very few women in Muncie owned or ran businesses. Her independence, combined with breaking social norms, led to a backlash from a group that called themselves the Defenders of Right.

Compared to her male counterparts, Kate Phinney endured far more criticism. Muncie’s crime lord, Frank “Peanut” Bass, was a celebrated businessman, despite his history of domestic abuse. His lengthy obituary (left) reflects public interest in him as “King of the Redlight.” Although his obituary does not offer an inherently positive view of Bass, the fact that his death received so much attention shows his status in the city.

Unlike Bass, who was famously shot by a lover, Kate died of uremia, a condition related to her excessive drinking. Her 1927 obituary was four sentences long, and neither praised nor damned her. She has been living under an alias in Indianapolis, where she moved after a string of public intoxication arrests, a predatory marriage, and many violent incidents. The fact that she left Muncie for a larger city, after leaving Anderson and Elwood for Muncie previously, speaks to the pressures she faced in a dangerous business.

The third article (left), from May 19, 1892, describes Kate being threatened with "white-capping." This was a form of vigilante justice in which a group would threaten and then lynch an undesirable person. Kate's response was to carry a shot gun for protection, but also to demand support from the local marshal. Although her business was often illegal and her premises raided by police, as a citizen and a business-woman, Kate invoked the rule of law when necessary.

We can also see from this article that the newspapers were not Kate's supporters. Although they did include her perspective in the interest of fair journalism, they referred to her as "obnoxious" when threats were made on her life. The different experiences of Peanut Bass and Kate Phinney suggest that Muncie's press laid greater blame on women, who were expected to uphold virtue both at home and in society. Her depiction also suggests that she became an emblem for the city's sins, which allowed the press to ignore wider criminal activity, and substitute her ejection for real reform.

To hear more about the historian's process and the methodologies used to research and create historical narratives, check out the discussion with Croy, Haley, and Nahrwold below.

Kate Phinney's life was marked by run-ins with law enforcement officers and conflicts with social reformers. To learn more about one of the people she might have run into, click on Alfaretta Poorman Hart—a woman who was both part of the social elite and Muncie's first police matron.