Dr. Anna Minerva Lemon Griffin was a practicing physician in Muncie around the turn of the century. She faced many challenges as an educated female professional, and unfairly endured notoriety because of her divorce and mental health crisis. Learn more about her in the video below.

This video was researched and created by Haley Biggerstaff, Elizabeth Dupire, and Lauren Latham. 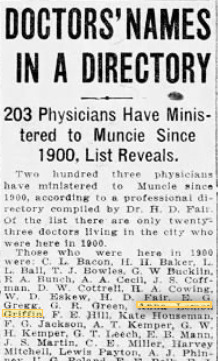 Newspapers are one of the most helpful sources local historians use to find and research historical figures. Thanks to marvelous digitization efforts by multiple archivists and historians, we now have a great variety of resources available to us online. Newspapers, especially local newspapers, tell us a lot about what members of the local community were interested in.

One of the difficulties with using newspapers as sources is the fact that women are often not referred to by their first names, especially married women. In order to reach into the past and find more information about women's history, historians often have to know just as much about their male relations, such as fathers and husbands, as about the women themselves.

Fortunately, this was not the case with Dr. Lemon Griffin. As a working woman with a respectable business, she is listed more often by herself than with her husband, as in the first newspaper clipping (above left). Additionally, after she married, she combined her maiden name and her husband's surname, and professionally was never referred to as Mrs. William Griffin. This unusual pattern of listing her directly without her husband shows the impact that she had on the city. This is confirmed by the second newspaper clipping (left). Even after she left town under a cloud of rumor, she was remembered and listed alongside the city's other medical professionals.

To hear more about the historian's process and the methodologies used to research and create historical narratives, check out the discussion with Biggerstaff, Dupire, and Latham below.

Dr. Anna Lemon Griffin was notable because she chose to be a physician, at a time when few women graduated from high school, and her perseverance against threats and dishonor. To learn about another woman who faced many challenges in her profession, click below to learn about brothel-owner and notorious rabble-rouser, Kate (Catherine) Phinney.